Spotlight on Wholesale - Saying no to single use plastic 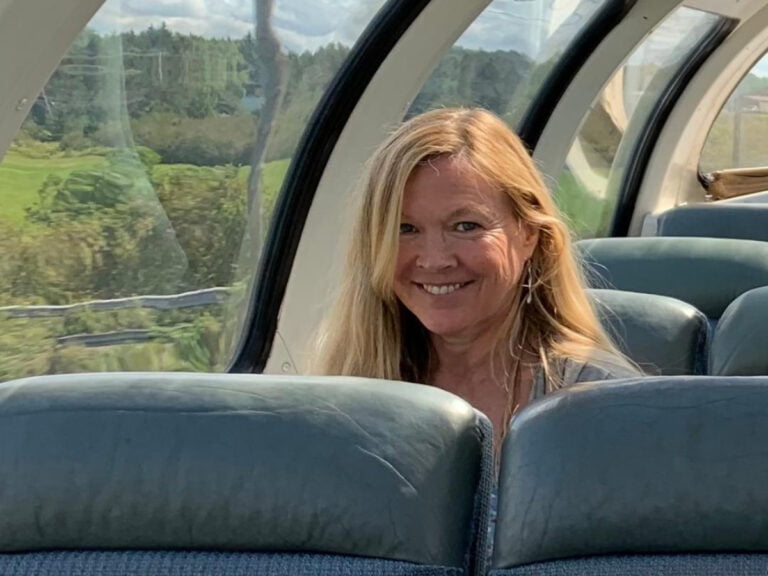 Welcome to Spotlight on Wholesale where we talk with our wholesale customers and find out more about their business and what’s happening with the fight against single use plastic in their country.

With her chic outfit and day-job in cybersecurity Cheryl isn’t what you might expect from the founder of an eco-activism organisation, a sign of how times are changing, and it’s not just hardcore hippies who are worried about the future of our planet. As we sit down to chat (first thing in the morning in Thailand, just before dinner time in California) Cheryl sips a cup of hot, zero-waste tea, made with fresh herbs from her garden.

Cheryl began her fight against plastic just over two years ago and now holds two roles, President of Ban SUP (SUP = single-use-plastics), an environmental advocacy organisation, which focuses on raising awareness of the plastic crisis and promoting legislation to deal with it, and owner of the Ban SUP Refill store which helps support the mission of Ban SUP and sells eco-friendly products and loose/refill products.

Cheryl, who has now lived for over two years without using any single-use-plastics, an impressive achievement, starts by telling me about the scale of the plastic crisis.

Nowadays we think of most plastics as being recyclable, but this is far from the truth.
So little plastic can actually be recycled and only under certain circumstances, so, as Cheryl says, being able to actually recycle some plastic is akin to winning the lottery. Plastics have to be clean with labels attached and only single types of plastic are recyclable. This means that when we sort products at home for recycling it’s just a fantasy that most of them end up anywhere but the landfill, incinerator or worse.

So what happens to all this plastic that’s not recycled? Well, it ends up in a landfill, it gets incinerated or, worse, pollutes our waterways, where it will take 100 – 500 years to break down, but never fully go away. In fact, according to a study by the World Economic Forum, by 2050 there will be more plastic in the oceans than fish.

All this plastic will turn into microplastics that end up in our food, our water and then our bodies. Scientists have now found plastic in human organs and even in the placenta of unborn babies.

Despite the US being one of the worlds most developed nations, they lag behind many other countries in waste management. Cheryl tells us that in her state only about 7% of plastic can even be recycled.

This needs to change and Ban SUP was recently working at the State level to push through a bill that will mean that California will recycle 75% of plastic waste by 2032. She thinks that this is not enough but you have to start somewhere!

However, the most recent round of voting on this bill was quashed by plastic lobbyists, an idiosyncrasy of US politics, who give money to politicians to sway votes. In this case polystyrene lobbyists gave money to many of the politicians and the bill lacked four votes to pass. Rather than disheartening her, Cheryl sees this as a learning experience, and next time around she’ll know to talk to as many of the politicians as possible before the vote and not assume that if they voted for the bill previously they’ll do so in future. She’s also working with many other environmental organisations to ensure strength in numbers for the next bill!

In the US these plastic lobbying organisations are a mighty foe. While many countries across the globe, including Thailand, are banning plastic bags, only a handful of US states have any sort of ban, tax or restriction in place. And more shockingly, thanks to the lobbyists, far more states have laws that prohibit local government from putting into place bans or restrictions.

Hope for the Future

So what can we do about this? According to Cheryl all hope is not lost, and she is optimistic for the future.

On an individual level she suggests doing a plastic audit, starting one room at a time, to see what can be easily replaced, and go from there. For example, in our bathrooms we can use bar soap rather than shower gel, bamboo toothbrushes rather than plastic, and toothpaste in a tin or jar rather than a plastic tube. She suggests that replacing liquid products with solids where possible is a great and easy way to start, as is going to your local refill store and loading up on cleaning products and toiletries by refilling your old bottles with greener alternatives.

On a community level Cheryl suggests joining a local environmental organisation. You can also speak to your local government representatives and share your concerns about the plastic crisis. You can ask them to find out if there are any opportunities to get the issue on the agenda at a local level.

Cheryl has done this successfully through Ban SUP and one of her greatest successes to date was getting her city to do an audit of their Zero Waste Plan. As a result of this the city discovered that they missed all targets for waste reduction and in fact the amount of waste per-capita had increased almost 50% since the targets were set. The city is now reviewing their recycling and waste management strategy and Ban SUP will be providing transparency to their actions and progress.

On a global level, Cheryl tells us that, 2021 will likely be a year of big changes. Many developed countries have been sending their plastic (and other) waste to countries across Asia for it to be recycled, processed, incinerated or just dumped out of sight of the West. Waste from Cheryl’s home town of Pasadena has been going to Malaysia, and Thailand is another popular destination for this waste trade. However, from January 1 2021 this has become much harder to do. Last year China banned the import of all waste products and now, thanks to the Basel Convention, it will be illegal to send mixed and contaminated plastic waste to most countries in the world (the only exceptions, who didn’t sign the convention, being the USA, East Timor, Grenada, Haiti, San Marino, and South Sudan).

Cheryl is excited to see what impact this will have on cities and states across the US who now will have to choose between illegal trafficking in waste and dealing with their own waste closer to home. She hopes that the plastic problem will become much more obvious to everyone and that “we won’t just be able to mindlessly pollute other countries because we wanted 17 lattes in one day.”

In order to get the message out in Pasadena the Ban SUP Refill store acts as a local educational centre for members of the public. They have a regularly changing display in the window, highlighting facts about the plastic crisis and suggesting ways that the public can reduce their impact on the planet. They also offer practical opportunities for people to sign petitions or send messages to their local government officials, as well as giving suggestions of how to minimise your personal waste generation and get as close as possible to zero-waste. This year they plan to buy a couple of sewing machines that people can come in and use for an hour or so, to repair and up-cycle their clothing.
Cheryl is very proud of the refill store concept and says that she hopes that when customers bring in their own containers to fill up, many of them are the last container they’ll ever use!

She also believes the US can learn a lot from many other countries around the world, for example Germany which has the highest rate of recycling and composting, or Canada which has just banned six different types of single-use plastics, including grocery bags, straws, stirrers, six-pack rings, cutlery and take-out containers.

Shopping cart
There are no products in the cart!
Subtotal
SGD$0.00
Discount
SGD$0.00
Continue shopping
0